Ueli Steck, a poised man who took the alpinist world by storm and became known as “the Swiss Machine” with his fierce dedication and stamina, passed away on Sunday, April 30, 2017 in an accident while climbing in Nepal.  He was 41-years-old. Steck was preparing a new route on Mount Everest and was reported to have fallen 1,000 meters near the Nuptse face. His body has been recovered.

In the short life that Ueli led, he accomplished an incredible amount of feats with speed records and first ascents in the Alps and Himalayas. From the moment he reached his later teens, he became an unstoppable force in the world of alpinism. When he was 18-years-old, Ueli climbed the north face of the Eiger and the Bonatti Pillar in the Mont Blanc massif. The Eiger was a favorite for him. In 2004 he climbed the Eiger, Monch and Jungfrau within 25 hours with Stephen Siegrist. This was just the beginning of what would lead to his first speed record on the North Face of the Eiger in 2007.

Ueli set his first speed record on the North Face of the Eiger climbing it in 3 hours and 54 minutes. He was excited about his accomplishment, but right away he had it in his mind that he could probably do it faster.  So, of course, a year later he lowered his record and climbed it in 2 hours and 47 minutes. Swiss climber, Dani Arnold, beat Ueli’s record climbing the Eiger in 2 hours and 28 minutes using some aid. But then the Swiss Machine returned in November of 2015 and reclaimed that record by shaving off the ascent by minutes, finishing in 2 hours 22 minutes and 50 seconds.

Ueli’s records continued, and in 2008, he received his first Piolet d’Or for his first ascent of Teng Kang Poche’s northwest face with Simon Athamatten. The year 2011 was a pretty successful year for Ueli as he solo-climbed Shisha Pangma in 10.5 hours and he and Don Bowie summited Cho Oyu, the sixth highest peak in the world. He and Bowie were making an attempt to climb Everest without supplemental oxygen and although they didn’t make it this time around, Ueli was exposed to the “Don Bowie Diet” in the high altitudes of Everest that consisted of Hostess cupcakes. Never in his life did Ueli understand why anyone would buy junk food such as Hostess cupcakes, but apparently in high altitudes, they were heavenly to Steck, and he ended up eating quite a few of them which then made him regret it once he reached lower altitudes. Ueli did end up making that ascent on Mount Everest without supplemental oxygen a year later in 2012.

His climbs weren’t without some controversy as the world heard of the public fight with Sherpas back in 2013 while he and Simone Moro along with Jonathan Griffith were on their NO2 Limits Expedition. Although Ueli was disenchanted as far as climbing on the Himalayas, Everest in general, after this occurrence, he was able to make amends with his Sherpa friends.

Through determination, training, focus and his undying love for the mountains, Ueli continued on with his climbing and the records didn’t stop after the controversy in 2013. In 2014 Steck made the first solo ascent of the south face of Annapurna which earned him another Piolet d’Or. In 2015 he accomplished his crazy 82 4,000-meter peaks in 80 days earning another record. Just last year, Steck and German climber David Goettler made an attempt to put up a new route on Shisha Pangma’s south face when they discovered the bodies of Alex Lowe and David Bridges. The closure it brought to both families was immense as these two legends went missing back in 1999. 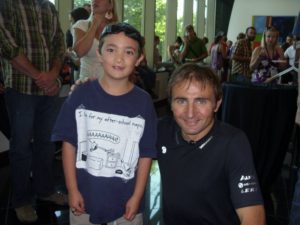 Ueli Steck with my son

While we all are aware of the extremely high risks to what we and our friends do, there is never a way to prepare for the hurt that is felt when one is lost, and the death of Ueli Steck has truly left a gaping hole in the community of the outdoor world. Thoughts and prayers go out to his family and the many friends who were honored to call this gifted man friend. You will be truly missed, Ueli Steck.