My boots are nothing to look at, even brand new they weren’t purchased for their eye appeal. Now this is a new picture, but the boots themselves are really old. 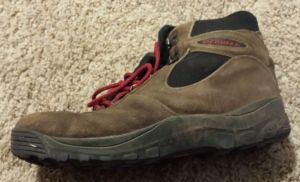 A recent photo of one of my old Merrell boots

I have worn these [amazon text=Merrell Boots&asin=B004D3AGTU] for years and years. They have been with me through many hikes in good conditions and bad. Many times have I worn these boots and got caught in rain or snow, water and mud. I should mention that these are a basic pair of boots, no Gore-Tex or insulation, but they have served my feet well since day one.

These boots have helped me climb the Wind River Mountains in Wyoming which are relentless, majestic and wild. These mountains are no joke. On my first trip there we climbed eleven miles to Firehole Lake. These mountains nearly prevented two of the boys with us, from camping with us for the night. Our first night there we even had a bear visit us in our campsite! Through all this the boots held strong.

These boots have also helped me get to many peaks in Utah. I always wear my boots when I do my day hikes, no matter where I’m going. I hike an amazing trail in American Fork Canyon which gets very sketchy, but my boots never fail me. This last trip up I decided to climb down to the bottom of an amazing waterfall-almost a really bad idea. Fortunately, I climbed out without any accidents.

In October, I get to pursue filling my deer tag. The state has a new, not well thought out system, for awarding the tags to applicants. This means I don’t get a tag every year like years before. When my father, brothers, and myself, go deer hunting we hike vigorously. By that I mean we don’t spend a lot of time sitting. Some might disagree with our hunting methods but my dad feels that success is improved if we cover ground. We don’t spend time eating, so you better drink or eat something while we are glassing because we will be moving soon after.

My Merrell’s go with me up each peak and down through each valley and everywhere in between. They’re high enough on my ankle for support but not too high to be uncomfortable. Also the traction is enough to keep me upright while traversing different terrain.

My only complaint is that the insoles don’t last as long as the boot. Which is ridiculous to think they would. So over the years I have replaced the insoles with an aftermarket brand. Which ironically made the boots more comfortable. That is part of the reason why I haven’t replaced these boots by now.

I do have other boots that have Gore-Tex and insulation but they don’t even compare to my Merrell Boots. I have some Cabela’s brand boots, but they should not be allowed to be sold to the buying public. I bought these boots because of price, but soon found out why they were on sale. I would not recommend Cabela’s boots to anyone.

I have recommended Merrell boots to other people and they became fast fans. Even my dad is one of those fans. Unfortunately, through all these experiences I have written, the time has come to at least begin looking at buying some new Merrell boots. The model’s they have all look awesome and I’m hoping to be able to find a pair that will support my feet just like the boots from the past.